Posted on December 27, 2009 by collectiveunderground 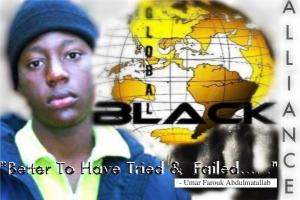 As stewards of the free world, Allah must know what is in our hearts through our actions. Western society is a bloody, murderous, unjust, avaricious, duplicitous, hypocritical, blasphemous atrocity founded in genocide and tyranny. To respect and uphold it is to respect and uphold evil, greed, and sin.” The twenty three year old Umar Farouk Abdulmutallab is reported as saying in what are believed to be his first public comments since being arrested and charged with attempting to destroy an aircraft.

“The Terrorists We Face Are Not The Taliban or Al Quaeda. They Are Devils Dressed As Pigs In Blue Uniforms & Devils Who Call Themselves Democrats & Republicans. There Is 1 Enemy. Let Us Be Of 1 Mind.” Texas Black Foot Soldier Maurice Coleman Tribute (Comments by Tex Black Foot Soldier Masontae Limbrick)

“THE APPROPRIATE NUMBER OF WHITE DEVILS BOARDED THE PLANE TO JUSTIFY DESTROYING IT. BEFORE THEIR COMPLETE DESTRUCTION, ALLAH WANTS THE WHITE DEVIL TO SUFFER 7 TIMES MORE THAN THEY HAVE CAUSED ALL THE OTHER RACES UPON THE EARTH TO SUFFER. IF YOU HATE AMERICA, THE WEST & THE WHITE DEVIL, WHEREVER YOU ARE IN THE WORLD, IT IS YOUR RESPONSIBILITY TO DESTROY A LITTLE SOMETHING EVERY DAY.” – Abdulmutallab allegedly said.

A former London student and the son of a wealthy Nigerian banker, Abdulmutallab is alleged to have set off a device as the flight approached Detroit airport. Reportedly, 278 (mostly Caucasian) passengers were aboard the plane.

While reports that Abdulmutallab’s alleged first public statements are unconfirmed and it is believed his captures are attempting to keep him from sending messages that would “encourage others,” sources close to the Global Black Alliance (GBA) say leader Prince Khomeini is calling for the “freedom fighter’s” release.

Martyr Refugee
View all posts by collectiveunderground →
This entry was posted in Better To Have Tried and Failed, Global Black Alliance, prince khomeini, Umar Farouk Abdulmutallab. Bookmark the permalink.