Posted on December 17, 2009 by collectiveunderground 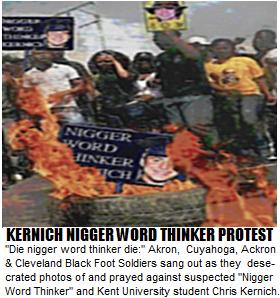 It’s war. With potentially thousands of whites and so called brainwashed blacks said to be hoping and praying for popular Kent State University student Chris Kernich to have a full recovery from injuries he received after allegedly thinking “nigger,” hundreds of Akron, Cleveland and, reportedly, an emerging brotherhood of Kent State Black Foot Soldiers joined to protest any recovery and to condemn whites who think it’s okay< to think nigger.

“Whites better start understanding now that they are no longer free to think the perverted and hateful things they privately think anymore.” Throwing pictures of the suspected NIGGER WORD THINKER upon a fire ignited to curse Kernich, one Akron Black Foot Soldier protested.


Others in the protest called for Ohio Yakub Muslim elders to drink the last cup of water for the twenty one year old business major and take his life.

The elders, however, are now asking for brother and sisters who heard Kernich think the “nigger” word or other vile thoughts to come forward.