Posted on January 24, 2009 by collectiveunderground

“Had proper Reparations been paid, Lynne would be alive today.” – NEAD DIGGERS 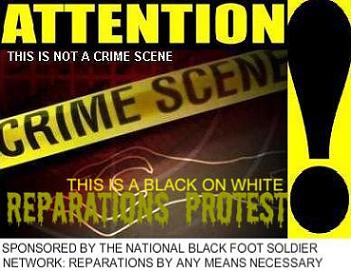 While local police say Nesbitt is accused of approaching Lynne Marie Thompson’s driver’s side window as she was using the ATM and shooting her four times with a semi automatic pistol, the National Black Foot Soldier Network, along with local Columbia Black Foot Soldiers say they recognize Nesbitt’s actions as a legitimate Reparations’ Protest, him as an activist and Thompson as the criminal.

“There’s No Such Thing as Black On White Crime. ”

Perkins says Nesbitt has a respectable record. “It appears he may have some Black On Black (BOB) crimes in his past, from when he was younger. We’re hearing he has matured significantly since then. It’s also been confirmed that while previously incarcerated, Nesbitt was disciplined for at least 11 infractions, including gambling and loan sharking, sexual misconduct, possession of contraband and the use of “obscene, vulgar” profanity.”