Posted on June 21, 2008 by collectiveunderground 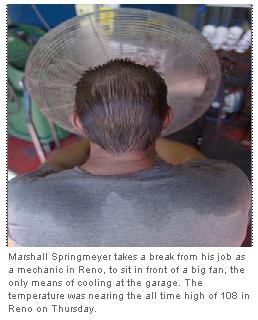 “God Damn American movement participants praise both God and or Mother Nature for the strings of disasaters and catastraphies that afflicted the property and lives of white Americans this week,” the movement’s new natonal spokesman Slaughter Lightfoot said. “We do claim responsibility for the torential heat wave chastising the whites of the West Coast, the floods devistating the property and lives of whites Midwest and, too, the increased amounts of ground level ozone afflicting whites in the Southern states. Divinity is responding to our prayers, meditations and fastings.”

Crooks, who spoke before a diverse audience of blacks from varying grassroot movements that included the Black Hebrew Pagans, the Yakub Sun Worshipers, members from the Nation of Light and some Black American Islamic sects, delivered his address at the Yacub13X Atlanta compound.

“Today, June 21, 2008 marks the beginning of a prayer, meditation and fasting protest that is the most unique among American protest movements. For, we are not assembling physically for this movement. Yet we know that those participating, where ever they may be, are all combined together in spirit.”

Spiritual leader Elohim Belial, who is widely regarded as the father of the movement, says the movement has been received requests for information from blacks, other people of color and even white sympathizers from nearly every state in the country.

“TO HASTEN GOD’S DAMNATION, THERE ARE THOSE WHO WILL MAKE A SMALL GOD DAMN AMERICA SACRIFICE & MEDITATION WITH US EACH DAY NOW UNTIL THE FALL DATE ARRIVES. THIS, TOO, IS ALSO WELCOMED” – Elohim Belial
“YET KNOW TODAY’S SMALL SACRIFICE WAS ALL REQUIRED TO FOR OUR START.”

“With the success we are seeing with this first date, we are encouraged that the Fall date (September 22nd). The fastings, meditation and prayers of participants were answered, this week, with the flooding in the Midwest and the heatwave torturing the whites on the West coast,” Belial said. “There was also a minor earthquake in St. Louis, on Friday, that we accepted as a primer from Mother Nature and or God that our fastings, meditations and prayers had been received and found acceptable.”